How does SA compare with the very best of France – the home of the most revered wines in the world and often used as the benchmark for most SA winemaking?…

How does SA compare with the very best of France – the home of the most revered wines in the world and often used as the benchmark for most SA winemaking? Here is a write-up of a private tasting that compared some of the finest wines from each country. Many styles and varieties could have been chosen, but I decided on wines with good track records and varieties that traditionally work well in each country. Each of the important regions in France were highlighted, except for Alsace and Champagne where SA would perhaps not have fared as well. The wines were tasted blind by 18 tasters and in each pair votes were tallied for a favourite and an overall winner.

A terrific match-up! Both are made from old-vine Chenin; the Huet from mostly 50-year-old vines and the Beaumont from 30-year-old vines, and older. Both are made in an elegant, fresh style without malolactic fermentation or heavy barrique influence. The Beaumont does see 400l oak fermentation, which gives it a slightly wider feel on the palate. Hope Marguerite has a tremendous track record with a string of Platter five stars; it is probably the most lauded Chenin from SA made in a classical style. Le Haut-Lieu is renowned for being the most fragrant and fruity of the three Huet vineyards. Typically steely and mineral from tuffeau limestone, it showed well but didn’t have the complexity and mouthfeel of the Hope Marguerite. An interesting exercise would be to compare the two wines in a decade’s time.
Winner – SA 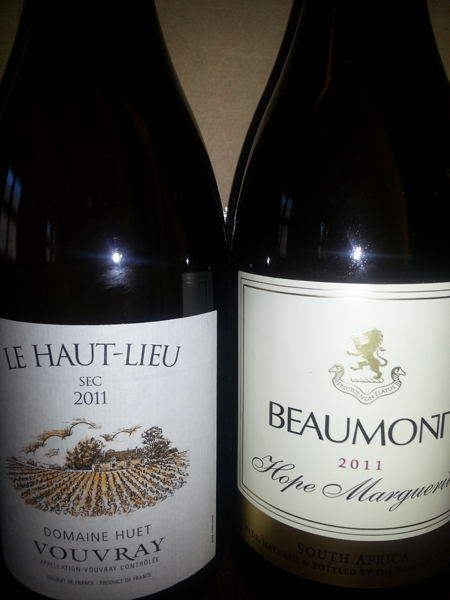 The HRV is the highest rated SA Pinot with a cracking 95/100 from Neal Martin of Robert Parker’s Wine Advocate. Romanée Conti is undoubtedly the most sought-after wine producer on the planet. So can this really be a fair match up? Well it is interesting how closely the two wines showed. Both lighter in colour, with red rather than black fruits, an underbrush note and a fine line of acidity. The HRV is utterly delicious but lacked the clarity of the DRC, was more broad shouldered, less fine and showing more oak influence. Amazingly, the HRV is aged in 43% new oak for 10 months, whereas the DRC has 100% new oak (lighter toast in 2007) for 16 months, which was almost impossible to notice. 2007 was a tough vintage to say the least, but being THE top producer, the Échézeaux is hardly a lesser wine. More of a Burgundy-lover’s vintage, it is medium bodied with concentrated strawberry and spice on the mid-palate finishing with a comet-like, racy tail that lasts forever. A wonderful experience that will become harder and harder to do as the prices of DRC and fine Burgundy shoot to the stars.
Winner – France 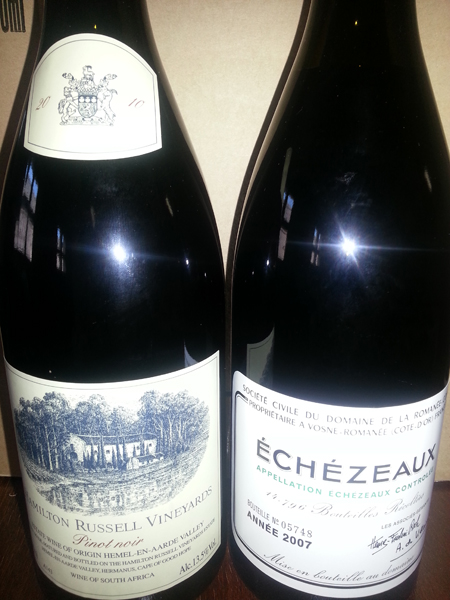 This was the first flight where the majority overwhelmingly thought the French was the SA wine and vice versa. Columella can be regarded as SA’s top red (and it is in my books) whilst Le Pavillon is one of Chapoutier’s finest vineyards and is often rated a perfect 100/100 from Robert Parker. The purpose of this flight was also to show what talented winemaking and suiting the correct varieties to the terroir can do. The Columella was far and away more fine, elegant, poised and fresh. And it’s from the Swartland! It was shy on the nose, showing that it is perhaps ‘shut-down’ at this stage. The palate is taught, mineral and spicy, showing French-like elegance, Spanish flair and SA fruit. Granted Columella does have a good dollop of Mourvèdre against the 100% Syrah of the Hermitage, it is truly a great wine that should age well for two decades if not more. Le Pavillon from the warm 2006 vintage showed massive ripe fruit, a touch of oxidation and powerful tannins. It’s a hedonistic style that one often sees from ripe Hermitage. La Chapelle 1990, ’78 and ’61 have this jammy fruit. Parker reckons it will age for 50 years. How dearly we all would like to have this opportunity!
Winner – SA 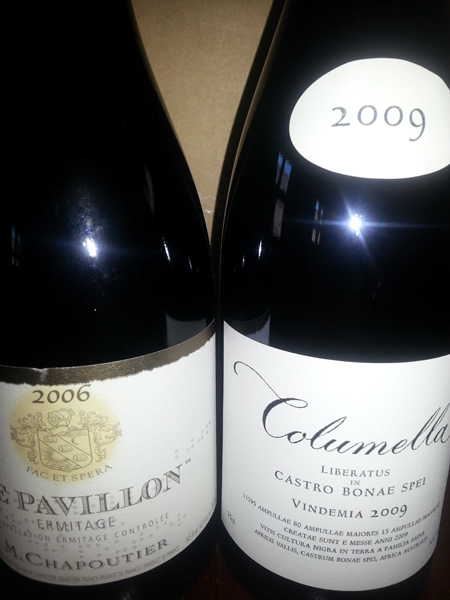 Of all the First Growths, Haut Brion is perhaps the most similar to that of SA Bordeaux blends. From clay and gravel-rich soil, it is able to produce fantastic Sauvignon and Semillon-based wines. It also manages to ripen Cabernet Sauvignon, Cabernet Franc and Merlot perfectly. Considered one of the top wines of this classical vintage, it was for me the best wine of the tasting. Decanted for four hours and built to last three or four decades, the fragrance, fineness, depth and poise of the wine is astonishing. Medium bodied, the balance and concentrated fruit dance on your palate with colossal intensity for minutes, leaving you begging for more. The Morgenster showed some of the stressed-fruit character one unfortunately come across in varieties in SA with pyrazine components. There seemed to be a slight battle of greenness and ripe fruit that led from the nose to the palate. The Morgenster is full-bodied, rich and suave and will age well for a decade; it just seemed to be blown out of the water by Haut Brion.
Winner – France 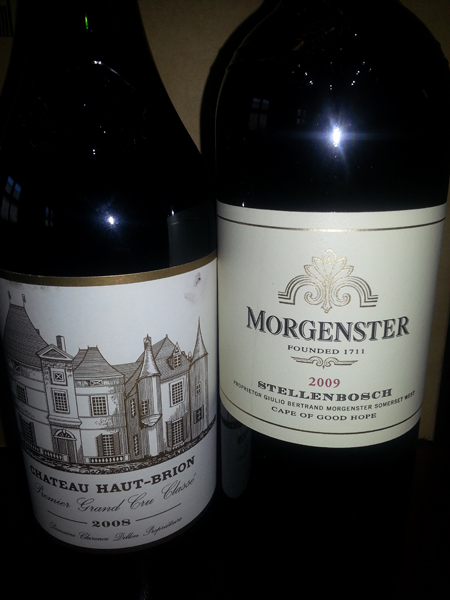 The sexy, violet-scented, strawberry-laced, elegant and enticing nose of the cooler-vintage 1997 Paul Sauer engaged the room with silence. A very special wine that for me was slightly marred by a hard acidity that ran through to the finish – a typical trait found in many fine SA wines from the ’80s and ’90s where freshness was achieved by added acidity, rather than optimally ripe fruit. The Palmer seemed much younger, even though it is more Merlot based, and it is yet to reach full maturity. Though not as powerful, there was more balance between the fruit, acidity and fine tannins. If you are used to the elegance of Bordeaux, there could be only one winner here, but these mid-nineties Paur Sauers are really special and are terrific value compared to Bordeaux of the same ilk.
Winner – SA 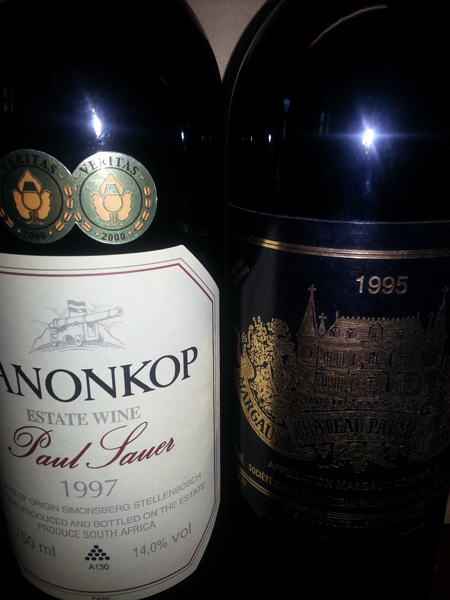 This was a very close tasting indeed and only a few votes decided the outcome. My verdict was exactly the same except for the final flight where, although the Paul Sauer was showing brilliantly, I believe the Palmer was the better wine. The results also highlight that SA should increasingly be focusing on Chenin Blanc and Syrah (along with other Mediterranean varieties) where we can make world-beating wines.

It must also be noted that the tasters on the evening could be said to have palates more used to SA rather than French wines. The more one is familiar with the richer, fuller wines of SA, the less you are wooed by the typically leaner, more savoury and elegant wines of France.

Wine Cellar is able to host any tasting your heart or palate desires!