Wine Cellar director Roland Peens recently shared a bottle of the ‘legendary’ GS Cabernet 1966 with one of the UK’s foremost wine critics, Jancis Robinson, on her visit to South… 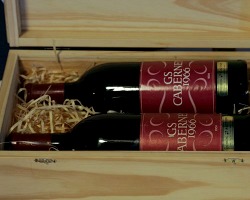 Wine Cellar director Roland Peens recently shared a bottle of the ‘legendary’ GS Cabernet 1966 with one of the UK’s foremost wine critics, Jancis Robinson, on her visit to South Africa. Described by US wine authority Wine Spectator as ‘the one true classic wine ever produced in South Africa’, James Molesworth awarded it a then-unprecedented 95 points. Jancis herself judged the wine to be ‘perfect’, scoring it at 20/20.

That the legacy of this historic wine is yet unknown remains a national loss, and forms the basis of an article that bagged Joanne Gibson the South African Wine Writer’s Prize.

George Spies had never received a formal education in winemaking, writes Joanne, but rather began his career in the lab at Belville Winery – started by Monis founder Roberto Moni. He’d later work for Monis of Paarl and the Stellenbosch Farmers Winery (SFW). His daughter, Ronel Spies, remembers him to be a debonair figure with ‘never a hair out of place, a great dad.’

‘Sherries and ports were his forte,’ recalls Dumpie Bayly, a Cape Wine Master and SA National Wine Show chairman who worked under him at SFW, adding that he was a terrific dancer to boot. Another former SFW colleague, Dave Hughes, reveals that he was an excellent horseman who ‘rode Spanish-style, in full garb.’

Gibson realized  that an online search on the origins of the GS Cabernet 1966 yielded little more than Molseworth’s Wine Spectator review, which asserts that Spies’s ‘bosses told him to stop’ – a theory that Hughes scoffs at. Yet Spies’s assistant refuses to speak about the wine,telling Gibson, ‘Whatever I say won’t be what you want to hear.’ Another theory suggests that the wine wasn’t made by Spies at all, but was actually part of an experiment in wine stabilisation – which is why it’s aged so well. Mr Bayly, however, is quite certain that the wine came from a ward in Durbanville, and ‘once it had been brought to Monis in Paarl, George would ready it for bottling.’ His recollection is that the SFW marketing department had decided not to sell this wine, due to its high tannin levels, and that Spies had decided to give it to SFW directors on special occasions – the reason behind the wine being named GS, believes Hughes. Nonetheless, Bayly says he has notes revealing that some of the wine was in fact sold, but under a different label – Rendezvous.

Perhaps more telling is the information that Gibson gathered from a Mrs Jean Parker, then head of neighbouring Durbanville farm, Altydgedacht, who also supplied Monis (and later SFW) with wine. ‘When Castle Wines decided to focus on spirits and stopped taking our wines, I was desperate to find somewhere else. Phil Walker suggested Monis, so I spoke to their old lorry driver and he took back some samples. George then came to see me and the result was that we worked together for many years.’ Following his retirement in 1981, Spies brought Parker a few cases, which he said she’d made.

In the end just how much of a part Spies played in the production of a wine bearing his initials is a question left largely unanswered, with a series of clues too minor to provide any definitive conclusions. His daughter Ronel, perhaps, is asking the right questions: ‘In the end maybe the proof that SA can produce classic wine matters more than who did what… isn’t it stunning to have produced something that people are still talking about 40 years later? Isn’t that what art is all about?’

Jancis Robinson on GS Cabernet 1966:
“…absolutely stunning – such a beautiful combination of maturity and delicacy – but with far more fruit integrity than most 1966 red Bordeaux would have now. Perhaps it was hard work in its youth but I imagine it will be at least a few months before I tasted a mature Cabernet as good as this… Lightly minty, fragrant and it spread right across the palate with satin texture. Gorgeous.”

Unfortunately GS 1966 is no longer in stock, but you can find a selection of other fine vintage wines on www.winecellar.co.za.