First released in 2010, the Niepoort & Sadie Cape Fortified 2008 was the vision of two of the greatest minds in the world of wine. It was produced from Swartland grapes under… 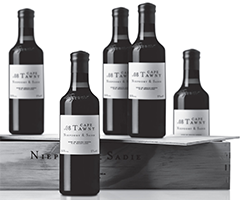 First released in 2010, the Niepoort & Sadie Cape Fortified 2008 was the vision of two of the greatest minds in the world of wine. It was produced from Swartland grapes under the guidance of Dirk Niepoort – a 5th-generation, leading Port producer. The fortified wine was aged in cigar-shaped barrels, or pipes, that were specially imported from Portugal. At the time, we were blown away by its ‘fiery depth and black fruits’ leading to ‘rasping but refined tannins and an impeccably balanced finish’.

‘I can’t let them taste this back in Portugal, I will be shot!’ said Dirk after realising just how good his Cape Fortified was, ‘it’s one of the best wines I have ever made, anywhere!’

Today, after 12 years of ageing, the same wine has now been released as a Tawny. Wine Cellar has a mere 120 bottles available at R295 per 375ml bottle. It’s a superb wine to drink during winter as well as being a great investment.

We also offer the 2019 Blitsem Witblits at R595, which has been ‘completely reworked, redefined and refined’. See the tasting notes on the 2017 release below.

Niepoort & Sadie, Cape Tawny 375ml 2008
The 2008 Cape Tawny Fortified had the benefit of input from a family with a history in the making of port: the Niepoort Family has been producing fortified wines for a couple of centuries now and their understanding of these wines is profound. It has been a great process of discovery to make this wine together with them. This release is a limited production and therefore highly collectable, but more important than that: it was made and bottled to be enjoyed and to be shared with friends. We opted for 375ml bottles to enable you to share more easily. – The Sadie Family

Sadie Family, Blitsem Witblits 2019
The 2019 has not yet been tasted by the Wine Cellar team but Eben believes this is ‘completely reworked, redefined and refined’. Alc.: 48%

This is the story of yesterday’s hero who has returned. Witblits, also known as ‘white lightning’, is a distillation of Hanepoot (Muscat de Alexandria) grape skins in a very pure, single distillation. Unlike grappa that is distilled in a vertical continuous column still, witblits is a single distillation which is just very slightly broken down with water. It is therefore a pure vintage product and an incredibly fragrant grape spirits; a whole new dimension. We love the product for it is literally a direct expression of the vineyard in the form of spirits. No instruments… just distilled on taste! – The Sadie Family

Notes on the 2017: We are very impressed with its poised and extremely pure nose which leads on to a subtle, long and crystalline finish. Served chilled, the Blitsem Witblits 2017 proves an inspired pairing with charcuterie and pickled herring. Because it is only single-distilled, and not continuously distilled like grappa, it offers an unadulterated expression of the vines and the vintage. – James Pietersen (November 2017)