The Haut-Médoc property of Château Bernadotte owns over 40 hectares of vineyards that run alongside the Pauillac appellation. The château lies just over 1km away from Mouton Rothschild with its vines planted… 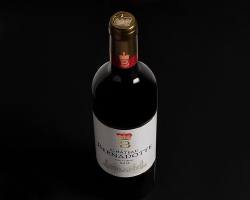 The Haut-Médoc property of Château Bernadotte owns over 40 hectares of vineyards that run alongside the Pauillac appellation. The château lies just over 1km away from Mouton Rothschild with its vines planted on the same coveted gravel soils.

We are about to land another parcel of the 2014 at the same price as last year. Frankly, with the current state of the Rand, there’s no better Bordeaux bargain to be found. While Haut-Médoc in name, the 2014 Bernadotte is classic claret with Pauillac aspirations and critic ratings.

The 2014 vintage was successful but not flamboyant and one where terroir really shone through. The Cabernet Sauvignon-led 2014 offers refinement and elegance along with great structure. In 2016, Neal Martin wrote, ‘this is a pretty Bernadotte that should give plenty of drinking pleasure over the next decade.’ We also have 10 cases of the 2015 available at R375.

Bernadotte, Haut-Médoc 2014
The 2014 Bernadotte is dense, plush and inviting. Succulent red stone fruit, pomegranate and expressive floral notes are all fused together in this deep, pliant Haut-Médoc. The 2014 is best cellared for another year or two, as the tannins are a bit firm today and the oak needs to fully integrate. Even so, the 2014 is gorgeous. – Antonio Galloni, 91/100 (February 2017)

The great dominance of Cabernet Sauvignon in the blend has given this wine both a fine structure and crisp swathes of black-currant fruit. It is a firm wine at this stage, although the fine fruitiness will become an important part of the taste. The estate is named after one of Napoleon’s generals who became King of Sweden. Drink from 2021. – Wine Enthusiast, 91/100

The 2014 Bernadotte has a spicy, more exotic bouquet than its peers with black pepper and touches of fennel infusing the black fruit. The palate is medium-bodied with grippy tannin, plenty of black fruit laced with pencil lead and tar, solid but not sinewy, good mass but like the 2014 Cantemerle, it just needs to develop more finesse and personality towards the finish. Give it three or four years. – Neal Martin, 89/100 (March 2018)