The 2019 BLANKbottle Little William, and its incredible story, captures the magic of Pieter Walser and, as such, the magic of fine wine. Modern life is fast, demanding quick decisions, and… 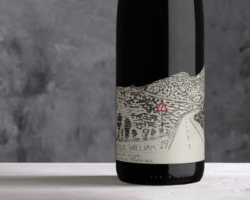 The 2019 BLANKbottle Little William, and its incredible story, captures the magic of Pieter Walser and, as such, the magic of fine wine. Modern life is fast, demanding quick decisions, and for us to sell great wine we are often required to capture its essence succinctly. However, in this case, it would be rude. Please take 5 minutes to read the unbelievable story below – it guarantees a special moment when you share your first bottle.

The 2019 Little William, from the exciting, up-and-coming region of Ceres Plateau 800m above sea level in the Witzenberg Mountains, joins the growing band of fine Syrahs in SA. This compelling Syrah is youthful and fresh; it has delicious spice over layered, cool fruit with a dry and refined finish. But to fully appreciate this special wine, from this special space, you need to read the story…

THE STORY OF LITTLE WILLIAM

In January 2016, I was driving back from a tiny little vineyard in the Koue Bokkeveld (Ceres Plateau). Cruising along at the 100km/h speed limit, I came to a very winding stretch of road leading towards the Witzenberg pass. Suddenly, for a split second, I thought I saw something in the middle of the road. I had just come through a super sharp bend and had to jump on the brakes with both feet. When I finally got my 470 000-km-on-the-clock Toyota to stop, there, on the white line in the middle of the road, stood a little blonde boy. I guessed him around a year and a half old. He was in his nappies and had a white T-shirt on, perfectly camouflaged on the white line. Unsure of what to do once I’d taken him out of the road, I thought it a good plan to prompt him and see which direction he takes off in (with myself of course right behind).

About 200 meters further along the road he (we) crossed a little bridge heading towards the other side of the canal. He turned up a dirt road which led to a farmhouse about 300 meters up a hill. Keeping up to his snail-like pace, we arrived at the house more or less 10 minutes later (in my experience with farm dogs, it wouldn’t have been wise to carry him). When the gardener saw us approaching, he called out to a woman at the house and judging by her reaction, she must’ve been his mom and he must’ve been missing for a while.

It was a bit of an emotional and chaotic environment so, knowing he was safe, I just turned around and left without introducing myself.

So each time I present a tasting with Little William wine as part of the line-up, I get the same question: ‘Why is it called, Little William?’ followed almost without fail by: ‘What does the family have to say about you calling a wine, Little William?’ My answer is always the same: ‘I never went back, they don’t even know the wine exists. But I am convinced there will be this one day where I’d be sitting at some local bar in Knysna, drinking a beer all by myself when the young guy next to me turns to me and introduces himself as William from Ceres.’ And I’ll be able to tell him: ‘Eendag, lank, lank gelede het hierdie oom jou lewe gered!’

For 4 years I had the privilege of telling the story of little William. Until last year. When Chapter 2 happened.

In November, we took our youngest son for a minor operation at Panorama Mediclinic, Tygerberg, Cape Town. The lady at reception looked at us with a puzzled look on her face. We later learnt that there had been a mistake on the paperwork and they were under the impression that he was an adult. They had subsequently booked him into an adult ward. The man next to him had drunk a cup of coffee at 6:00am that morning with milk in. His operation therefore had to be postponed and he obviously missed his theatre time slot. He had to wait almost the whole day for the next slot. He and Sebastian eventually left for the theatre at more or less the same time. I went to get us a cup of coffee, and as she always does, Aneen started making conversation with the milk-in-the-coffee guy’s wife. On my return Aneen said: ‘They are from Ceres, tell her the little William story.’ I cringed, thinking: ‘Why would I do that??’ I tried to let her comment slide and filled the awkward silence with useless words. We carried on with the small talk and she ended up telling us that she is a vet and her husband is a farmer. ‘Where do you farm in Ceres?’ I asked. ‘In the Witzenberg mountains, on a farm called Blah-blah-blah,’ she answered.

And, as you’ve probably guessed by now, that was the name of the farm where I dropped little William that morning. It started dawning on me that it might be my Knysna-bar-thing moment happening in a totally bizarre, different way. ‘Do you have a son called William?’ I asked. ‘No,’ she replied, ‘but my nephew is called William and they live on the same farm, in the house next to the road.’ We did the sums and he would’ve been exactly 1 and a half years at the time. So it turns out it wasn’t a beer-in-hand pub in Knysna, but a coffee-in-hand hospital in Cape Town. I should’ve listened to Aneen right from the start… so I told her the whole story and she phoned her sister-in-law. ‘Did you ever lose William on the farm?’ she asked (I don’t think that’s the type of story you volunteer to tell your extended family if not prompted). ‘Yes,’ she said, ‘there was this one day…’

PS: This incident made me think about everyone’s life stories. I’m convinced that these kind of things happen to everyone. The difference is that I just happened to call a wine Little William, and I have a reason to re-tell this story. If I didn’t, I would’ve possibly only re-told the story once or twice, but I can imagine how the finer details could’ve gotten lost between profit margins and VAT. I have a responsibility to convey the story in an honest and factual way. You know how easily a story gets blurry. So each time I drive the road, I recheck my facts: Where exactly did William stand? Distances? The name of the farm? The story then became part of our story. And that day when the lady mentioned Ceres, the first thing Aneen thought about was the boy in the road. – Pieter Walser, BLANKbottle

BLANKbottle, Little William 2019
Notes on the 2018 vintage: Little William is right up there with my favourite Cape Syrahs. Sourced from a vineyard at 800 metres on the Ceres Plateau, this is fermented with 100% whole bunches and is wonderfully sappy, savoury and white pepper-scented with a whisper of oak and delightful freshness. Drink 2021-30. – Tim Atkin MW, SA Special Report 2019, 95/100