Etna DOC in Sicily continues its upward trajectory as one of the most exciting wine regions in Europe. Whilst best known for their elegantly structured Burgundy and Barolo-esque red wines, Tenuta delle Tere… 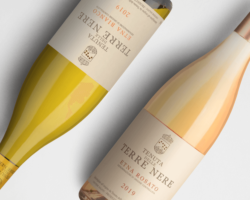 Etna DOC in Sicily continues its upward trajectory as one of the most exciting wine regions in Europe. Whilst best known for their elegantly structured Burgundy and Barolo-esque red wines, Tenuta delle Tere Nere and its new generation of white wines and rosés have become important players on the slope of Europe’s highest active volcano.

The Etna Biancos and Rosatos are unlike their more conventional counterparts – both styles are mineral-driven, distinctly savoury and zesty with a dried herb edge. Rather than just enjoyed as an apéritif, these are serious food wines. Super underrated, they offer exceptional value and make for delicious drinking.

The Terre Nere 2019 Etna Rosato is pure sophistication and one of our favourite rosés! 100% old-vine Nerello Mascalese, it has a provençale feel with Sicilian personality – smoky and salty with fine-grained tannins.

The Terre Nere 2019 Etna Bianco is based on Carricante and was one of Wine Enthusiast’s 2020 Editor’s picks. It is poised and precise, fruity and flinty with racy acidity and a saline-edged minerality, which highlights the uniqueness of this wine and the Etna terroir. Marco de Grazia, Terre Nere’s proprietor and pioneer, calls 2019 ‘the finest Carricante harvest ever’ with its small production, full ripeness and crisp acidity. ‘The whites of Sicily, particularly those grown in the foothills of Mount Etna,’ writes the New York Times, ‘have been earning attention as among the most distinctive and unusual white wines in Italy, if not the world.’

The circular DOC, around the foothills of Mount Etna, makes for a multitude of soils and microclimates. A shape-shifter terroir, if you will, the organic practices, volcanic soils and extra-ordinary elevation yield sharp temperature differences between night and day, resulting in finessed, long-ageing and entirely unique wines.

Please let Jolette@winecellar.co.za know should you be interested in the spectacular contrade, single vineyards from Terre Nere.

‘We are all witness to the rebirth of one of the oldest wine regions in the world.’ – Benjamin Spencer, The New Wines of Mount Etna

‘Even though Sicily’s reds get most of the spotlight, its new generation of dry, radiant whites should be on every wine lover’s radar.’ – Kerin O’Keefe, Wine Enthusiast, October 2020

‘Sicily, like the rest of Italy, has long been known as red wine territory. Yet slowly, the whites of Sicily, particularly those grown in the foothills of Mount Etna, have been earning attention as among the most distinctive and unusual white wines in Italy, if not the world.’ – Eric Asimov, New York Times, July 2019

‘For the first time, I realised that I had never tasted Carricante properly. I had not understood that this salt-stung, volcano-fed, rock-rooted, sun- and rain-lashed wine growing up with its face to sea winds was a wine that, at its best, needed age. It’s a wine that can show TDN like old Riesling, and develop dried citrus and toast like old Sémillon. Have we all been drinking Carricante too young?’ – JancisRobinson.com, December 2020

Certified organic. Made by Marco de Grazia from old Nerello Mascalese vines. Very pale, provençale colour. Broad, meaty nose with more personality than the typical Provence rosé. Edgy, with proper juicy fruit with real personality and a proper, intriguing finish. More of a food wine than an aperitif, this has some light tannins too – and the warmth of Etna. 2020 – 2022. – Jancis Robinson, JancisRobinson.com, 16.5/20

This lively, light-bodied white does a delicate dance on the palate, with hints of thyme and Meyer lemon pith accenting the dried apricot and salty mineral flavors. Bright and balanced. Drink now through 2024. – Wine Spectator, 91/100