Château Bernadotte – one of Wine Cellar’s bestsellers – is back in stock! Whilst Haut-Médoc in name, this is a classic, Cabernet Sauvignon-led claret with Pauillac aspirations and critic ratings. This 40-ha Haut-Médoc property has seen serious… 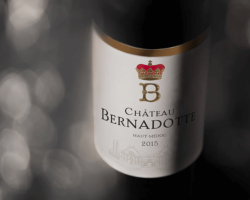 Château Bernadotte – one of Wine Cellar’s bestsellers – is back in stock! Whilst Haut-Médoc in name, this is a classic, Cabernet Sauvignon-led claret with Pauillac aspirations and critic ratings.

This 40-ha Haut-Médoc property has seen serious investment over the last few decades – contributing to a steady rise in its reputation. The château lies just over 1km away from Mouton Rothschild with its vines planted on the same coveted gravel soils.

Jeb Dunnuck called the 2015 ‘one of the standout Cru Bourgeois‘, whilst Neal Martin said how the 2015 Bernadotte shot above his expectations when tasting the 2015 blind.

2015 was a great Bordeaux vintage and is often compared to the much-lauded 2009 and 2010 vintages. Warm and dry summer conditions were tempered by early August rains and cool temperatures during September and October. It resulted in generous, finely balanced, deep-fruited wines. The wonderful freshness, dark fruit and refined, firm tannins of the 2015 Bernadotte make it the perfect medium-bodied claret for the table.

Château Bernadotte, Haut-Médoc 2015
‘The 2015 Bernadotte shoots above my expectation. It has a clean and fresh bouquet with plenty of appealing graphite notes. The palate is medium-bodied with dusky black fruit sprinkled with black pepper, good length and nicely focused. Tasted blind at the Southwold 2015 Bordeaux tasting.’ – Neal Martin, Vinous, 90/100

‘Formerly the property of one of Napoleon’s generals, this estate is now performing impressively after renovations. This wine is richly structured and packed with black fruits. Dark tannins vie with black currants and ripe spice in this wine that will age well. Drink from 2024.’ – Roger Voss, Wine Enthusiast, 91/100

‘This has a very plush and slightly spicy palate with earthy notes as well as a gravelly, slightly leafy edge. The palate has a very composed core of fine, long tannins that finishes with gently grippy freshness. Try from 2021.’ – James Suckling, 91/100

‘One of the stand out Cru Bourgeois I was able to taste is the 2015 Château Bernadotte which checks in as 65% Cabernet Sauvignon, 22% Merlot, and the balance Petit Verdot, aged 12 months in one-third new barrels. It’s a terrific, floral, seamless, medium-bodied beauty that offers fine tannin, a silky texture, and integrated acidity. It shows the purity of the vintage and should drink nicely for a decade or more.’ – Jeb Dunnuck, 90/100