There were a host of big releases in Bordeaux on Thursday with prices settling around our ‘15% below 2016’ estimates. Cos d’Estournel and Pichon Baron were the two biggest releases… 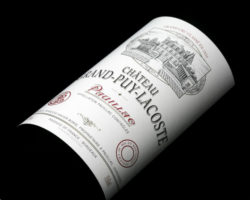 There were a host of big releases in Bordeaux on Thursday with prices settling around our ‘15% below 2016’ estimates.

Cos d’Estournel and Pichon Baron were the two biggest releases with the former receiving one of the few potential 100/100s. Lisa Perrotti-Brown MW from the Wine Advocate calls it ‘truly profound’! Pichon Baron too has great ratings all round and both offer the more classic style of Bordeaux in 2017.

Chanel-owned Canon and Rauzan-Ségla are now some of the hottest and most sought-after wines of Bordeaux. They are relatively well-priced compared to their peers and previous vintages have soared in price over the last few years.

Smith Haut Lafitte Rouge is ‘easily one of the highlights of the vintage. Dense, unctuous and impeccably balanced’ writes Antonio Galloni. While the Blanc is ‘head and shoulders above many wines in this vintage’ according to Decanter.

Lastly, my two favourite wines in all Bordeaux are the classically restrained wines of Grand-Puy-Lacoste and Les Carmes Haut-Brion. The former has decades of an unbelievable track-record and is ‘one of my wines of the vintage, and a must buy’ says Decanter’s Jane Anson and will thrill buyers over the next 3 decades. 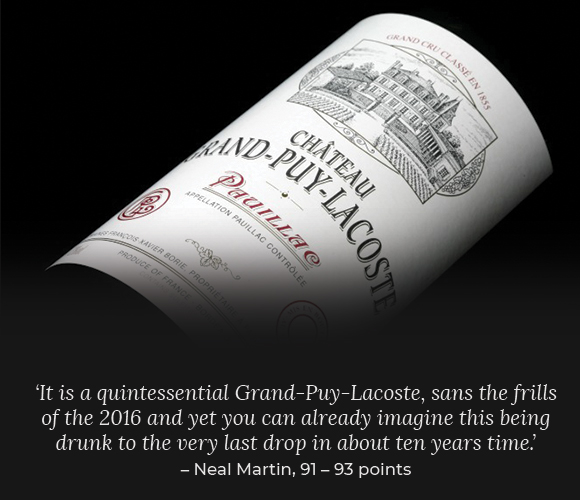 Les Carmes Haut-Brion sold out quickly on the market and we have just 3 cases to offer. With roots back to 1584, it was completely renovated in 2013 and is often referred to as ‘uniquely Burgundian’ in style. With a large component of Cabernet Franc and 50% whole-bunch fermentation, it’s a supremely elegant, long-ageing, intriguing and delicious wine! 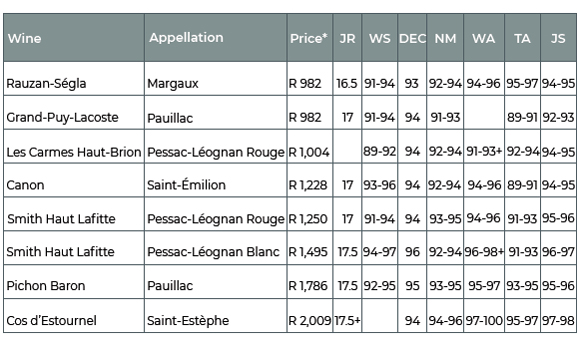 Rauzan-Ségla, Margaux 2017 – R 982
The 2017 Rauzan-Ségla is matured in 50% new oak with 14% vin de presse, which was apparently from the high quality Cabernet this year. It has a fascinating bouquet with pure blackberry, iris, crushed stone and a light estuarine influence that becomes stronger with aeration, just a faint touch of oyster shell developing in the glass. The palate is medium-bodied with very fine tannin, crisp acidity, very elegant and refined, possibly the most feminine Rauzan-Ségla in recent years with a silky smooth finish. It is not the instant showstopper like the 2015 – this is more understated and needs time for its quality to be fully appreciated. Tasted on three occasions. – Neal Martin, 92-94 points

Grand-Puy-Lacoste, Pauillac 2017 – R 982
The 2017 Grand-Puy-Lacoste was picked from 15 to 29 September cropped at 45hl/ha, matured in 75% new oak. It has a clean, precise and conservative bouquet that takes time to open. I like the mineral tension here, the focus, and hints of freshly shucked oyster shell emerging with time. The palate is medium-bodied with fine grain tannin, fresh in the mouth with plenty of cedar and tobacco-infused red and black fruit that drive a long, slightly peppery finish. It is a quintessential Grand-Puy-Lacoste, sans the frills of the 2016 and yet you can already imagine this being drunk to the very last drop in about ten years time. It is simply a very likeable Grand Puy Lacoste in the making. Tasted twice with consistent notes. – Neal Martin, 91-93 points

Les Carmes Haut-Brion, Pessac-Léognan Rouge 2017 – R 1,004
The 2017 Les Carmes Haut-Brion includes 10% more Cabernet Sauvignon than last year with 45% whole bunch fruit. There is 13.2° alcohol. It is aged in 60% new oak (less than previous years), 30% one-year old oak and 10% amphora that have been baked at 1,200° Celsius instead of 500° Celsius that means there is less oxygen ingress. It has a very pure and strangely, almost Burgundy-like bouquet, perhaps somewhere towards the mid-Côte de Nuits. Dark cherries, wild strawberry, a hint of orange sorbet and later a touch of glycerol. The palate is medium-bodied with fine grain tannin and plenty of sappy, black fruit sprinkled with white pepper and bay leaf. As Guillaume Pouthier mentioned in conversation, there is a linearity to this Les Carmes Haut-Brion and one has to admire the precision and focus on the finish. Afford this five or six years in bottle before approaching and you will have a very delicious and distinctive Pessac-Léognan on your hands. – Neal Martin, 92-94 points

Canon, Saint-Émilion 2017 – R 1,228
The 2017 Canon was picked 4 to 21 September and 22 to 27 September for the Merlot and Cabernet Franc at 42hl/ha and matured in 56% new oak. There is 14.0° alcohol this year and the pH comes in at 3.66. This takes a little time to open, eventually revealing blackberry, briary, crushed stone and light iris scents. The palate is medium-bodied with very fine tannins and good backbone. Strangely, it reminds me a little of modern-day Figeac, that Cabernet component smaller here but very expressive with touches of graphite and flint towards the linear but beguilingly fresh finish. I like the manner in which the limestone shines through the wine here, something noticeable in recent vintages. Whilst not the sensational 2015 or 2016, it is a damn fine Saint-Émilion that will settle at the top of my banded score. – Neal Martin, 92-94 points

Smith Haut Lafitte, Pessac-Léognan Rouge 2017 – R 1,250
The 2017 Smith Haut Lafitte was not affected by frost and is therefore a classic blend matured in 60% new oak. The bouquet demands a little encouragement from the glass this year, eventually opening with floral scents, more iris than violet, flanked by blackberry and bilberry. The palate is medium-bodied with fine tannin that comes across just a little chalky in style. This feels very cohesive and comes replete with a detailed and nuanced finish that might lack the flair and volume of the 2016, but it is certainly sustained and persistent. Give this four to five years in bottle and subject to optimal barrel maturation this may well land at the top of my banded score. – Neal Martin, 93-95 points

Smith Haut Lafitte, Pessac-Léognan Blanc 2017 – R 1,495
The 2017 Smith Haut Lafitte Blanc was deprived of a hectare parcel of 80-year old Sauvignon that was pulled up last year. It has a focused bouquet with mineral-driven citrus fruit, yellow plum and honeysuckle, the 50% new oak nicely integrated. The palate is medium-bodied with taut citrus fruit laced with pineapple and tangerine. There is a subtle tropical undercurrent to this Smith Haut-Lafite Blanc. It fans out generously towards the finish with a long and satisfying, lightly honeyed finish. This is a very fine white Smith Haut-Lafitte, already surfeit with pedigree that should age with style and panache. – Neal Martin, 92-94 points

Pichon Baron, Pauillac 2017 – R 1,786
The 2017 Pichon Baron was picked from 18 to 21 September for the Merlot and 27 September to 3 October for the Cabernet Sauvignon. It has a very sophisticated, pure and quite intense bouquet with black fruit, cedar and potent graphite aromas. This feels very focused and the 80% new oak is seamlessly integrated. The palate is medium-bodied with a smooth entry, very sleek and silky with a gentle grip. There is a lovely sweetness here, perhaps less austere than I was anticipating with a very long, quite spicy finish. Tasted four times with consistent notes. – Neal Martin, 93-95 points

Cos d’Estournel, Saint-Estèphe 2017 – R 2,009
The 2017 Cos d’Estournel is matured in 60% new oak and comprises 13% alcohol, approximately the same as the 2016. It has a more expressive and welcoming bouquet than usual, maybe more indicative of how this wine will mature in bottle, less opaque than the 2016. A common theme throughout the range from Cos d’Estournel is a Pauillac-inspired backbone/tannic structure coupled with an attractive scent wafting over from the estuary…think mudflats, oyster shells and the tang of sea spray. It gains a little intensity with aeration but never fully lets go. The palate is very well balanced with filigree tannin, rendering this one of the most approachable barrel samples from the estate in recent years. The coolness of the latter part of the season defines this Saint-Estèphe more than the precocity of June: streamlined, cool and linear with a velvety finish that feels sleek, to the point of being understated, though that belies its length and focus. This is simply a very classy wine in the making and typical of the more recent sophisticated style pursued by the property in recent years. – Neal Martin, 94-96 points