South African fine wine is gaining momentum as an alternative investment class. Intrinsic wine quality is at an all-time high as we enter a new era of industry-wide, quality-focused winemaking…. 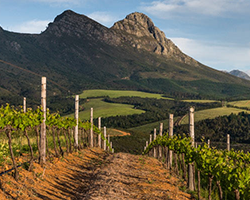 6 South African wines you should be investing in now

South African fine wine is gaining momentum as an alternative investment class. Intrinsic wine quality is at an all-time high as we enter a new era of industry-wide, quality-focused winemaking. Smaller producers and larger historical properties are harnessing young and old vines with a deeper understanding than ever before.

The 2015 vintage has been a tipping point for local and international consumers, as we realize that South Africa can play in the fine wine market. Accepted as the greatest modern-day vintage, 2015 produced balanced, structured and poised wines in Stellenbosch and across the Cape. Early signs point to the fact that the drought-affected 2017 will be another exceptional vintage, providing local and international critics with incredible news-worthy wines.

Wine Cellar released two investment portfolios in 2018, adding 20 000 bottles of fine South African wine to the future secondary market. In addition to housing the largest fine wine storage operation in Africa with over 50 vintages of SA wines, Wine Cellar has a dedicated secondary market department to develop the liquidity in vintage South Africa wines. With high inflation and a weak Rand, producer inflation is currently higher than consumer inflation and therefore the value of South African wines is being positively repositioned in the market. Under these circumstances and adding to this the appreciation of older vintages, the Wine Cellar team of expert wine judges believes that annual long-term returns of 10-20% are achievable.

So, which wines would be considered the blue-chip stocks? Here’s a selection of SA’s finest investment wines:

1. Kanonkop Paul Sauer 2015
Consistency in quality is key to investment potential and no other South African wine has been more consistent. Paul Sauer was South Africa’s first positive growth investment wine since the 90’s with a stream of regular local and international awards. The latest and probably the most impressive of accolades is the perfect 100 points from Tim Atkin, international Master of Wine, who releases an extensive annual report on South African wines. Covering wine regions all around the world, this is Atkin’s first perfect score in the New World. With Paul Sauer 2015 selling out from the farm in record time, some retailers have already doubled the price due to local demand.

2. Meerlust Rubicon 2015
Rubicon is arguably South Africa’s greatest wine brand. Produced in significant volume and with an impressive distribution network, Meerlust has built up incredible brand equity over the last 4 decades. The quality of Rubicon hasn’t quite matched its status, however, well not until the 2015 vintage. The greatest modern day vintage, combined with maturing vineyards and a refinement in winemaking has pushed the Rubicon to a new level. With impressive scores and a low price relative to its peers, Rubicon 2015 is a great investment.

3. Thelema Cabernet Sauvignon 2015
Traditionally the wines of Bordeaux have been the best investment vehicles due to their unparalleled quality and long-term aging potential. Cabernet Sauvignon is also king in Stellenbosch and Thelema has been a leading example of Cab Sav production since the early 1990s. Their 2015 is again arguably their finest yet and will age well for 2 decades. The price of Thelema Cabernet Sauvignon has been increasing below inflation over the last 5 years and we believe it is under-priced in the market. Expect future vintages to rise in price, making benchmark vintages ever more expensive.

4. Alto Cabernet Sauvignon 2015
With the average price of Stellenbosch Cabernet Sauvignon close to the R400 mark, Alto is another wine that we feel is under-priced. Distell has finally realized the potential of this property and is investing in future quality. 2015 provides momentum for it to regain the status it enjoyed in the 70s when it was atop the industry. 2015 is spectacular and will age well for decades.

5. Sadie Family T’Voetpad 2017
Eben Sadie is South Africa’s best and most famous winemaker and the wines in his Old Vine series all offer an excellent investment proposition. Produced in tiny quantities and snapped up on release every year, they quickly see the secondary market at great returns. The T’Voetpad is South Africa’s oldest vineyard and produces a majestic, world-class white wine that will age for decades. Often South Africa’s highest scoring wine and offered at a fraction of the price of the great wines of Burgundy or Bordeaux, the T’Voetpad has ample room to grow.

6. Restless River Cabernet Sauvignon 2015
Not considered a ‘blue-chip’ stock, we feel the rising star of Restless River is an outside bet for great returns. Craig and Anne Wessels planted Cabernet Sauvignon in the Hemel-en-Aarde 20 years ago, going against the trend of a prolific local Pinot noir culture. The great 2015 vintage, refinement of winemaking and maturing vines have produced a simply sensational Cabernet Sauvignon. No other Cabernet sells out as quickly and it has built up a cult following locally and in Europe. 2015 sets a new benchmark outside Stellenbosch.