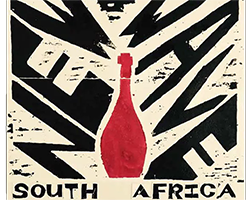 This year’s ‘New Wave South African event’ recently took place in Soho, London. It was attended by numerous UK critics and trade members, including the renowned Jancis Robinson and Julia Harding, and considered by some to be the ‘tasting of the year‘. Originating in 2015, the tasting featured roughly 150 of SA’s best up-and-coming wines, showcased by the producers. The annual event is hosted by a plethora of UK importers eager to showcase the wines they have on offer. Combined with an exceptional lunch by Bertus Basson, the UK trade industry have not stopped talking about the tasting.

As a result, Jancis considers it as possibly her ‘tasting of the year’ and commented on how it’s the first time she has ever encountered anyone queuing for a professional wine tasting in London. Julia also remarked, ‘I gave so many 17s!’ Their overall sentiment seemed to be one of surprise that no other markets seem to have caught on to the brilliance and excellence that SA has to offer. ‘The US is really missing out on this sort of great quality,’ said Jancis, going on to elaborate, ‘perhaps that helps put a brake on the price rises that were perhaps inevitable after the Cape’s succession of drought-shrunk harvests.’

Special highlights included old-vine wines from Swartland, our array of Chenins, Ginny Povall’s Botanica Range and the new Krone range. This is some great publicity for SA wine and ‘new wave’ producers.

We are fortunate enough to sell many of the wines that were available at the tasting. This includes SA’s different Chenin Blancs and wines from the likes of Krone, Alheit, AA Badenhorst and many more. The rest are available on our website.