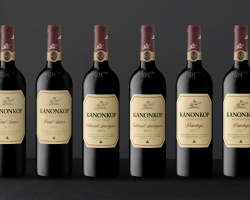 Kanonkop cemented its cult status on Sunday as Strauss & Co set a South African wine auction record when a rare three-decade Paul Sauer vertical sold for a cool R546,240. The Jeroboam 1988 – 2006 vertical sold at twice the pre-auction estimate during the white-glove 124-lot sale, which included Boekenhoutskloof and Klein Constantia. The Boekenhoutskloof Syrah 1997 reached R7,462 per bottle while the Vin de Constance 2007 fetched R5,569.

The demand for Paul Sauer reached fever-pitch following Tim Atkin’s 100-point score for the 2015. 23 vintages of this Simonsberg Bordeaux blend went under the hammer, selling between a low of R1,992 per bottle, or 750ml equivalent, and R8,794 for a rare bottle of 1983.

2017 will vie with 2015 as the greatest modern-day vintage and today we are offering a Kanonkop ‘Iconic Vintages’ mixed case, including two Cabernet Sauvignon 2015s, two Pinotage 2017s and two bottles of 2017 Paul Sauer.

Kanonkop, Paul Sauer 2017
The 2017 Paul Sauer is a classic blend of 76% Cabernet Sauvignon, 17% Cabernet Franc and 7% Merlot from vines grown on prime Stellenbosch decomposed granite, Hutton and Clovelly soils with an average age of 30 years old. This 2017 is undoubtedly elegance and seamless finesse personified. For a wine like this, Grand Cru Classe Bordeaux is and always will be the road map region by which winemakers navigate their path to greatness. This 2017 Paul Sauer has all the subtlety and finesse, elegance and seamless balance to rival the greatest Bordeaux blends of France, while retaining its own unique South African signature imprint. Drink this wine on release to banish your curiosity but then cellar some of the rest for up to 30+ years. Undoubtedly another must-have icon for collectors and drinkers alike. – Greg Sherwood MW, 98/100

Kanonkop, Pinotage 2017
Matured for 16 months in French oak, 80% new, the nose shows red and black cherry and plums to go with musk, vanilla and spice plus a little banana loaf. The palate is extremely flavourful and very well balanced with pure fruit, punchy acidity and fine tannins (alcohol: 14.32%). It’s polished in the best sense and sure to appeal to a wide range of wine enthusiasts. – Christian Eedes, 93/100

Kanonkop, Cabernet Sauvignon 2015
We are in the presence of greatness, a creation that is an absolute thing of vinous beauty that is certainly unrivalled in quality since the famous 2004 Kanonkop Cabernet Sauvignon that controversially trumped the Paul Sauer 2004 to win the Platter Red Wine of the Year. At this super youthful stage of its development, this wine is all about the future potential and not many other South African red wines have the track record that Kanonkop has. Architecturally, this has the shape and precision of a majestic Sir Norman Foster sky scraper that towers above its neighbours. Never over worked, never over oaked, this is surely one of the greatest single varietal Cabernet Sauvignon’s produced in South Africa. – Greg Sherwood MW, 97/100