The Telos is the best expression of what Tokara stands for. Considerable investment from the Ferreiras has afforded the Tokara winemaking team the opportunity to produce an ultra-premium wine of profound quality, achieving their goal… 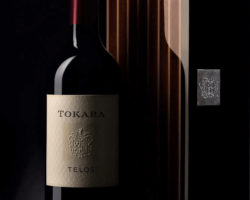 The Telos is the best expression of what Tokara stands for. Considerable investment from the Ferreiras has afforded the Tokara winemaking team the opportunity to produce an ultra-premium wine of profound quality, achieving their goal of competing with the world’s best. Based on Cabernet Sauvignon from an 18-year-old single vineyard, there will only ever be 1,000 (numbered) bottles produced each vintage.

Back in 2005, Tokara began fastidious trials and employed various ‘prototype wines’ before releasing the Telos 2015 – to great acclaim. First and foremost, the 2016 Telos is a wine of quality. It is elegant and understated and is the result of clear, vinous ambition cosseted in luxury. A blend of Cabernet Sauvignon with 5% Petit Verdot and 2% Cabernet Franc, it was aged in special 60% new oak. Individually packaged in beautifully crafted wooden cases, this is a rare and super-limited collectable. Only 40 bottles available.

Essential to 2016’s elegant power is the geology of this specific Cabernet Sauvignon block. The clay subsoil is able to retain significant water, which is crucial to the vineyard during a drought. With more water and cooler soils, the flavours and tannins ripened more slowly, giving the Telos its impressive, towering tannin structure. There is no doubt that 2016 was a tougher vintage, with considerable pressure from raging fires and intense drought. In response, the viticultural team took a super-focused approach in the vineyard, allowing the winemaking team to produce something truly special.

Tokara, Telos 2016
Kicks off with poised red fruit and spice, next up there is darker fruit laced with some fennel seed and subtle, toasty oak notes. As the wine opens up, its awesome perfume mingles with delicate baking spice, mature tobacco, red fruits, a graphite, gravelly, earthy note and a refreshing citric edge. Complex for sure! The palate is medium- to full-bodied, boasting incredible lift and linear purity of fruit. The clever use of oak contributes to its soft-shouldered sense of luxury and adds to the shy but fine tannin structure. Should age gracefully over the next decade. A wine of ambition and care. – James Pietersen (November 2020)